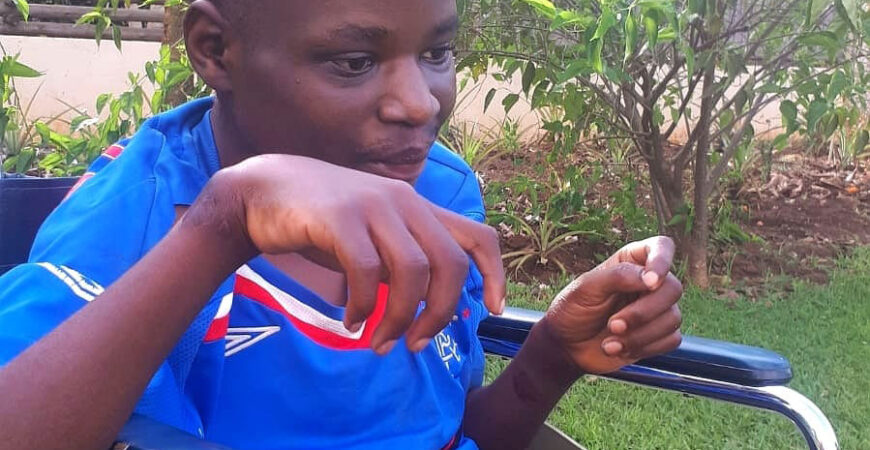 Wilson is one of the children under the care of New Beginnings – I’m sure many of our volunteers are familiar with this sweet boy. Wilson came to New Beginnings after he was severely mistreated. He was locked in a dark grass-thatched hut and survived by eating his own faeces. During this time, maggots ate a lot of his muscles away and after two years of rebuilding his body in hospital, Wilson is a living miracle. Due to the endless darkness he endured over a long period of time, Wilson is now 90% blind. Wilson also suffers from epilepsy which has led to some brain damage and he often gets depressed. Wilson has been struggling lately as his health became extremely poor and he has been fed through a tube.

We are delighted to now be able to give you a positive update on Wilson’s health as he has been making significant improvements over the past two months which we pray will continue. Wilson has struggled to gain weight as he was reluctant to eat but he now has gained a healthy amount of weight in the past month. Wilson is eating eagerly with a good appetite and rarely denies food these days! Wilson looks much more healthy, active and alert. His joints are appearing to be less painful as Wilson is not nervous during or after physiotherapy exercises. The nurses administer medication to Wilson daily which are successful in preventing his epileptic breakthroughs. There is also perfect cooperation between Wilson and his carers and nurses.

We ask that you keep Wilson in your prayers – that he will continue to make positive progress. Thank you. 🙏🏼